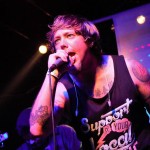 Please visit website above for rates and inquiries regarding vocal lessons or assistance starting your band!

Corrington Wheeler is an internationally touring American singer, voice actor, author, and a voting member of the Recording Academy for the Grammys. In both Pop and Post-hardcore rock industries, he has performed in venues internationally located in Tasmania, Japan, Cambodia, Mexico, the United Kingdom, and all across the United States. CW has collaborated with nationally touring musicians in bands such as The Color Morale with Fearless Records, Sycamour with Hopeless Records, Darkness Divided with Victory Records, & Dayseeker with Invogue Records/Spinefarm Records. He has been printed in newspapers, appeared on national radio stations, and toured with acts from bands such as Alien Ant Farm, Flyleaf, Bobaflex, Seasons After, Parabelle, Trapt, and others.

Corrington studied Digital Media at the University of Houston and graduated the entrepreneurial Small Business Administration's "Boots to Business" certification. Currently, Corrington occupies the SCM's managerial position, human resources, marketing, various administrative roles, workshops, is a vocal instructor for the SCM School of Rock, and manages artists under SCM as an acting Label.
As a completely independent artist, Corrington has sold +2,000 copies of his books, sold +500 shirts, gained +120,000 followers across social media platforms, +200,000 streams on Spotify, has +420,000 views between his current Youtube channels, and once held +100,000 YT subscribers on a publishing-backed channel.

There are no reviews yet for this teacher. Be the first to review Corrington Wheeler: Sterling Conservatory Of Music