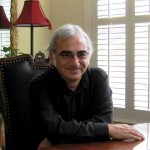 Zaven Parsamyan is a native of Yerevan, Armenia. He began his piano studies at age six under Yakov Zargarian and Ivan Meliksetian at the Tchaikovsky School of Music for gifted children in Yerevan. After his graduation from the Komitas State Conservatory in Yerevan he was named professor of that school and later, vice-rector of its branch in Spain.

Since his student years, Mr. Parsamyan has been performing solo and with orchestra, teaching extensively throughout Armenia and Western Europe. In 1995 he was invited to Spain where he gave numerous recitals, conducted Master Classes, and judged international competitions. Soon after, Mr. Parsamyan founded “The School of the Highest Piano Mastery” in Aragon, Spain.

During the course of his career, Mr. Parsamyan has developed a unique and highly effective method of teaching and has nurtured many outstanding laureates of international competitions and concert pianists worldwide.

As a performer, Mr. Parsamyan's playing is distinguished by its depth and philosophy in harmony with magnificence and virtuosity. He has been hailed by critics as “A musician of the highest caliber.”

There are no reviews yet for this teacher. Be the first to review Zaven's Piano Studio