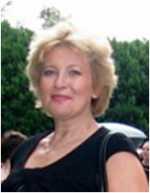 Most recently, Professor Andronikova served as an accompanist at the School of Music, George Mason University. Prof. Andronikova received her Masters of Music in Piano Performance, Accompanying, Chamber Music and Pedagogy from Odessa Conservatory.

She has also performed at the Kennedy Center in Washington, D.C.
Prior to moving to the Washington D.C. area, Prof. Andronikova served as an adjunct piano faculty and staff accompanist at Austin Peay University, Tennessee and University of Central Arkansas, coaching voice, violin, flute undergraduate and graduate students, accompanying for University symphony in numerous musical works including the opera productions of Bernstein’s Candide, Menotti’s Amahl and The Night Visitors, Shepard’s St. Nicholas, and Mozart’s Marriage of Figaro to name a few, also accompanying at Arkansas Chamber Singers and at Reston Chorale.


My Certifications and Awards

My daughter has been having piano lessons with Mrs. Andronikova for about 6 months now. Mrs. Andronikova is definitely a professional and skilled piano teacher with great dedication and technique to work with children. She catches what's lacking, ie., note reading, posture, fingering; she then works towards correcting and improving her piano skill. Mrs. Andronikova explains theory in a way that a 6 years old child can understand. She adjusted the lesson plan according to the my daughter's needs. She cares about the student's progress and encourage my daughter to practice at home. Scheduling is the easiest with Mrs. Andronikova. She is also understanding and accommodating schedule changes. There is a time that we need to go out of town for an extended period of time. My daughter asked that she comes back to Mrs. Andronikova.

Ms. Andronikova is an outstanding musician, a talented and dedicated teacher/piano instructor, and a wonderful individual. My son has been Ms. Andronikova’s student for the last 4 years . I cannot believe how much progress he has made during this time. He started as the intermediate level student and in the matter of a year or two he made it to the advanced level. He had been performing at various piano competitions (Viola Hartman, NVTMA Piano Achievement Awards, etc.) and received several honorary awards. In spring 2017 he made it to the finalists group at Baroque Bach competition and was invited to perform at George Mason University concert hall. Ms. Tatiana ‘s choice of music given to her students is always amazing and refreshing. My son has been playing music by Bach, Mozart, Beethoven, Chopin, Brahms, Rachmaninoff, Tchaikovsky, Shostakovich and Prokofiev. Ms. Tatiana knows how to challenge and engage her students, how to keep them focused and interested. Each of her Christmas recitals is a sought after event and a great opportunity for her students to showcase their skills in front of their friends and families. Her recitals are very popular and always gather a crowd of a significant size. I have nothing but deep admiration and respect for Ms. Tatiana’s love for classical music, and her exceptional ability and skill to share it with her students and teach them to understand and appreciate it. Ms. Tatiana is a hard-working teacher with great passion and devotion to her profession It is truly an honor to know Ms. Andronikova.

I am writing this review to express my sincere appreciation for my son’s piano teacher, Mrs. Tatiana Andronikova. For the past 5 years and to presence, my son has been taking piano lessons with Mrs. Tatiana. He has learned at an increasingly rate and exceled to competitive level. She has special ways of teaching young children feel comfortable and enjoy learning and coming to lessons and perform at recitals. At the same time, she is tough and discipline. She makes sure you master the piece before moving to the next piece. And of course, practice, practice and practice at home every day is a must. We never have any difficulties with make-up lessons. If you miss a lesson for some reason, she is very understanding and flexible of letting you make up. For the past 3 years, my son has been competing at least twice a year. As a result, he has received first, second, and third place, honorable mention, and performance at honor recital. For all the above reasons, I highly recommend Mrs. Tatiana for piano teacher. Have your kids come and audition and you will like her. Best,