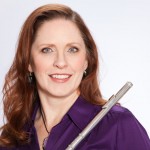 Suzanne Duffy earned a master’s degree in flute performance from Indiana University and a Bachelor of Music from Northwestern University. In addition to post-graduate studies at SUNY-Stony Brook, she was a four-year member of the New World Symphony, a Miami Beach-based orchestral fellowship training program led by Michael Tilson Thomas. Her principal teachers have included Carol Wincenc, Peter Lloyd, Walfrid Kujala, Samuel Baron and Mary Louise Poor. Duffy has participated in master classes with William Bennett, James Galway and the late Geoffrey Gilbert.

In May 2019 she was featured in Mozart’s Flute and Harp Concerto in C Major, with Symphony of the Vines for its season finale concert at Mission San Miguel. In December 2018 she was a soloist with harpist Marcia Dickstein for the Cal Poly Symphony’s performance of Howard Hanson’s “Serenade for Solo Flute, Harp and String Orchestra.”

Chamber music collaboration is an important part of her enjoyment as a flutist. In February 2019, her trio with flutist Carol Houchens and pianist Lynne Garrett, made its debut for the Symphony of the Vines chamber music series at Cass Winery in Paso Robles. She made a three-concert tour in June 2019 as part of Duo Solaré, Duffy’s longstanding duo with guitarist James Bishop-Edwards. It included performances for the Ventura Guitar Society and at the San Luis Obispo Museum of Art. She collaborated with Santa Barbara-based pianist Kacey Link in May 2019 for the Santa Barbara Music Club’s series finale program. More recitals are being planned for upcoming seasons.

In 2012, Duffy presented recitals in Paris and Domfront, France, and performed for the 2011 National Flute Association’s annual convention in Charlotte, North Carolina, as a winner in the Convention Performers category. She was among six flutists who were selected to perform winning compositions from the partner competiton, the Newly Published Music category.

A member of Cal Poly's Music Department since fall 2013, Duffy has held flute instructor positions at Indiana and Indiana State Universities. In addition to her successful private studio teaching in the greater San Luis Obispo and Santa Barbara communities, she also has a diverse arts administration resume with symphonies, ballet companies, and chamber music organizations, including having previously served as production manager for Camerata Pacifica, of Santa Barbara, Scholarship Chair for the Santa Barbara Music Club, and most recently artistic operations coordinator for the Santa Barbara Chamber Orchestra.

There are no reviews yet for this teacher. Be the first to review Suzanne Duffy Flute Lessons