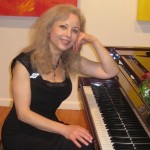 Internationally acclaimed soloist, chamber musician, recording artist and educator, Sophia Agranovich is “a bold, daring pianist in the tradition of the Golden Age Romantics…A tigress of the keyboard” – Fanfare. Her performances are captivating audiences by the “orison of uncommon beauty” – Audiophile, “interpretation that dares to be different”, “magnificent shading and superior musicianship” – American Record Guide.

A native of Ukraine, Sophia Agranovich won the Ukrainian Young Artists Competition–currently Mykola Lysenko International Competition–at ten, being the youngest participant. At thirteen she performed Concerto in E minor by Chopin in Chernivtsi, Lviv and Kiev. Her concerts were broadcast on national TV and radio stations. Her teachers in Ukraine were professors Anna Stolarevich and Alexander Edelmann, peers of Vladimir Horowitz in the class of Felix Blumenfeld and disciples of Heinrich Neuhaus. At fifteen, Ms. Agranovich entered the Juilliard School in New York City as a student of legendary professor Sascha Gorodnitzki, who himself was a student of Josef Lhevinne (peer of Sergei Rachmaninoff and Alexander Scriabin). While at Juilliard, she also studied with Nadia Reisenberg, a disciple of the St. Petersburg piano school of Leonid Nikolaev and student of Hofmann and Alexander Lambert – student of Franz Liszt.

Ms. Agranovich earned Bachelor and Master Degrees from the Juilliard School, holding full scholarship and a Fellowship teaching Piano Minor at Juilliard. She won First Prize in the Bergen Philharmonic Competition. After graduating Juilliard, Ms. Agranovich began working towards her Doctorate at the Columbia University, but deferred that pursuit to raise a family, which led to her additional 23-year career in Information Technology. Having earned a certification in Computer Science, she worked as a systems analyst for the Metropolitan Life Insurance Company where she received the Presidential Quality Award for Computer Systems Design and Support, and later as a senior programmer/analyst/project manager/vice president at Merrill Lynch. Ms. Agranovich also studied naturopathy, traditional Indian medicine and traditional Chinese medicine, receiving certifications in Yoga, Pilates, and other holistic disciplines. She taught Yoga and Pilates at the YMCA branch.

Sophia Agranovich is an esteemed pedagogue, lecturer, master class clinician, adjudicator, and is a recipient of numerous teaching awards. Her students often win top prizes in regional, national and international competitions and are playing at prestigious venues and internationally. They had been accepted to Juilliard School, Manhattan School of Music, New York University, Mannes College  and other notable universities. Their performances were broadcast on radio and TV, including WWFM “Kids on Keys” and WQXR “Young Artists Showcase”. Ms. Agranovich is an active member of various professional music organizations, listed in Who’s Who in America and Who’s Who in the World, a voting member of NARAS, Artistic Director of ‘Classicals at the Circle’ music series at the Watchung Arts Center,  Program Chair and Board member of Music Educators Association of New Jersey.

Sophia Agranovich’s music education heritage is one of the most impressive today and stems from the great tradition of Western European, Russian and American schools.  In Ukraine her teachers included Anna Stolarevich and renowned professor Alexander Edelman, peer of Vladimir Horowitz at the Kiev Conservatory in the class of Felix Blumenfeld and later  – disciple of Heinrich Neuhaus at the Moscow Conservatory.

At the Juilliard School in New York, she was a student of legendary professor Sascha Gorodnitzki, who himself was a student of Josef Lhevinne (peer of Sergei Rachmaninoff and Alexander Scriabin).  She also studied with the eminent Nadia Reisenberg, a disciple of the St. Petersburg piano school of Leonid Nikolaev and student of Josef Hofmann and Alexander Lambert – student of Franz Liszt himself. Sophia also studied with David Diamond and Joseph Bloch in musicology, Felix Galimir, Paul Doktor, and Samuel Sanders  in chamber music and ensemble. Ms. Agranovich was awarded Fellowship teaching Piano Minor at Juilliard.

In her instruction methods Sophia Agranovich combines traditional Russian, Western European and American schools. She teaches overall musicianship along with music theory, music history, ensemble, accompaniment and improvisation. She stresses the connection of music and other art forms, such as literature, painting and sculpture. This helps to achieve true style and balance in performing.  Ms. Agranovich guides her students to develop their individuality and independence in interpretations.  She uncovers hidden potential in every student, who progress very fast and to the best of their capabilities. She also incorporates into her teaching approach her additional studies and experience in psychology, kinesiology, music therapy, and meditation.  Sophia Agranovich is certified as Yoga and Pilates instructor, Life Coach, Holistic Fitness Practitioner and Holistic Health Practitioner. Sophia Agranovich’s  broad range of interdisciplinary studies has greatly enhanced both her performing and teaching, specifically by reducing physical strain and technique limitations, achieving refined states of concentration, focus and inspiration.

All ages and levels

“…Agranovich has not only technique, but is refreshingly unwilling to flash it, as she seeks out the subtleties Liszt has built into the music… It all comes together in an interpretation that dares to be different. Beauty has tamed the beast… Magnificent shading and superior musicianship…”

Alan Becker – American Record Guide
***
"A musician of splendid gifts "
"As a pianist of remarkable technical accomplishments, she is also one of the more sensitive artists who brings to her performances a percipiency and sensibility all too rare among her contemporaries."

"The over-all musicianship, her knowledge of a composer’s intentions aids her in bringing to all her performances that kind of intelligence one should demand of all first-rate pianists, but who, in many cases, concentrate most of their efforts on the sheer virtuosity of their impeccable techniques."

"She is a singular artist and should be admired for that rare quality alone”.

David Diamond, Composer
***
" The pianist’s technique is thrilling, but it’s the boldness of her conception—her refusal to feminize the music—and the extraordinary dramatic urgency she brings to these pieces through grand Romantic gestures—probably to a greater degree than Chopin himself could or would have attempted on his Érard or Pleyel piano—that leaves one with the strongest impression of Agranovich’s playing..."

Maria Nockin - Fanfare Magazine
***
"She surely knocks off the Liszt etude with panache, plays the finale of the Beethoven with impressive washes of sound, and deftly aerates the endless swirls of Schumann’s piano writing—swirls that can so easily get stuck in lesser hands.”

“Unfailingly responsive to changes in musical terrain, she refuses to coast or to scant on the details, and the result is a series of eventful performances invigorated by imaginative articulation (the Liszt etude is especially striking in this regard), sensitive treatment of dynamics, and (most notably in the Liebestraum) a fine sense of phrasing in which plasticity of tempo never degenerates into self-indulgence.”

Peter J. Rabinowitz - Fanfare Magazine
***
"...Extraordinary technique, refined velvety tone and elegant interpretations which are uniquely hers..."
"Her instrument is the piano but her sound rivals an entire orchestra."
"From fiery, volcanic eruptions of passion to ethereal nuances of tranquility and tenderness that stir the soul, the enormity of her unmatched dynamic range of expression transports listeners to the realm of the mystical.”

Somerset Reporter
***
"Remarkably, Sophia Agranovich manages to present these extremely familiar works with a distinct profile. In general, her style is clearly textured, measured in tempo, and rhythmically playful without being mannered. "

"...she travels across Liszt’s vast world with poise and determination, and throws out a sure sense of grandeur and theater with nary a trace of pomposity and bombast, a refreshing way with this booby-trapped score."
Peter Burwasser - Fanfare Magazine
***
"...It’s an amazing display of Liszt’s keyboard wizardry, demanding of the player’s exhaustive technical resources and staying power, which Agranovich brings to her performance in abundance... "

"Agranovich's reading of the Sonata is a masterly and brilliant display of pianistic virtuosity--I can't recall hearing any better--and Armonioso's recording captures her Steinway piano in New York's Sean Swinney Studios with lifelike presence. If it's a Liszt Sonata of grand sweep and rhapsodic romantic gesture you crave, Agranovich can be counted on to deliver the goods."

"...It’s not her speed as velocity that impresses, it’s the precision and clarity of her finger work. Also astonishing is her dynamic range breadth which ranges from the most hushed pp to the most thundering ff, and her ability to control the gradations of her crescendos and decrescendos to everything in between so that the extremes are always arrived at naturally."

"How she does it I don't know, but Sophia Agranovich’s alchemy of mind-bending technical prowess and heart-melting emotional expressivity add up to one of the most glorious piano recitals this side of Elysium. Urgently recommended."

There are no reviews yet for this teacher. Be the first to review Sophia Agranovich