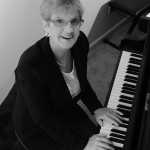 Mrs. Love has her Bachelor of Music Degree in Piano Pedagogy and State Teaching Certificate from ECU. She minored in voice and organ.

During this period of time she adjudicated contest-festivals in both North Carolina and South Carolina. Her own private students participated in both state and district level contests receiving Superior Honor ratings.

In 1993, she and her husband Kent Love served in Music Ministry to Nova Sibirsk, Russia.

Mrs. Love co-teaches Marching Percussion with her husband each summer for the East Mecklenburg Marching Eagles (13yrs.) and is an independent piano teacher, both state and nationally certified. She has performed as a percussionist in the Winthrop Carolinas Wind Orchestra and performed with them in Spain in 2007.

Currently, Mrs. Love is teaching in her home studio and part time teaching at the Metrolina Regional Scholars' Academy.

Mrs. Love lives in Matthews, N.C. with her husband, Kent Love. They have two grown children.

1989 – Music and Teaching Tips from a composer – Margaret Goldston

1994 – Music in Berlin at the Turn of the Century – Dr. James Ogle – Meredith College

Mrs. Love teaches classical music as the foundation for all other styles of music. Basic improvisation is taught along with developmental scales and arpeggios. Transposing basic folk tunes is begun in the early beginning years.

Methods that are used in her studio include Alfred Premiere, Music for Little Mozarts, Bastien Basics, and The Francis Clark Music Tree. Transfer students continue in their existing method.

Contact me and I will email you an attachment of my piano policy, fees, calendar and enrollment form.

5 year olds and up are encouraged to enroll in piano study.
Adults of any age are welcome.

My students have entered both district and state contests and received superiors.

Mrs. Love began piano study when she was 7 years old. She began playing in church for the services when she was 12. She became the Youth Choir and Adult Choir Accompanist in the 9th grade. She was the accompanist in her High School for the Mixed Chorus and Girls Chorus in 9th and 10th grade. She added to her accompanying the HS Choir and Madrigal Singers in the 10th and 11th grade. Mrs. Love began teaching piano while still in HS.

She accompanied the Glee Club in college as well many Brass, Woodwind, Percussion, and Vocalists.

While in college Mrs. Love took a job as organist and began her first Piano Studio.

After moving to Charlotte Mrs. Love became a church choir director and began another piano studio.

Mrs. Love currently (2013-14) teaches piano to students in her home studio. Her students are busy preparing for their Performance Class Masquerade, NCFMC Festival Contest and the NCMTA Contest. She also is teaching part time at the Metrolina Regional Scholars' Academy where she teaches General music K-1 and choir to 5th - 8th graders. Her MRSA students are currently preparing for performances at the Southern Christmas Show, Winter Concert and The Carowinds Music Festival.

There are no reviews yet for this teacher. Be the first to review Robin Love Piano Studio