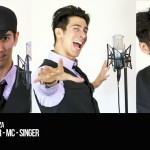 Here is the program: fearlessperforming101.com

He currently performs all over the world but on his down time he devotes his efforts to education. As an experienced clinician Mr Sperrazza has coached high school and college groups all over the country teaching and supplying students with the necessary skills to compete in todays entertainment field.


Paul Sperrazza has been performing as a singer since 1996. He has entertained

Mr. Sperrazza is the Co-creator and Co-director of Toxic Audio, off-Broadway’s a

cappella sensation. During the span of his career, he has become most known

guitar, and drums into high-energy vocal peformances which occasionally include

physical acrobatics. He is currently touring the world entertaining audiences from

New York to Japan with Toxic Audio, winner of the 2004 Drama Desk Award for


Paul has recently finished conducting performance camps at Berklee College of Music with his program FearlessPerforming101.com.  This is a program that helps young students realize their max potential by teaching them how to take a fearless and proactive approach to their music education.

50 dollars an hour.  We work on recording a project.  Throught the recording process I show you how you can better your performance and instill good habits when performing.

I am a producer and performer of the Off-broadway hit "Vox Audio"  2006 winner of the Drama Desk Award.  I still perform professionally and sub for various professional a cappella groups across the nation.

There are no reviews yet for this teacher. Be the first to review Paul Sperrazza