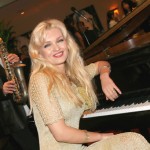 I have taught piano for about 20 years, with great success. Some of my students are as young as 4, some are in their 70s, and everything in between. I love to teach piano, it gives me great joy and personal satisfaction. I've traveled the world in concert, but after having my child I have settled in Beverly Hills, CA where I teach many celebrities and their children.

I am very patient, caring and encouraging in my teaching approach.


I hope to hear from you soon, and to have you among our many happy students.

I studied piano since the age of five. At nine I won my first international piano competition. I attended Saint Petersburg College and Florida State University where I graduated with honors in piano performance in 2001. In 2009 I opened Oksana School of Music & Art in Los Angeles, where we teach piano, voice, guitar, violin and other instruments.


Here's some additional information about me:

“Music brings us together. It inspires us. It helps build confidence in young people, and brings fulfillment to adults and seniors. To me, music is a blessing.” –OKSANA KOLESNIKOVA

Oksana’s performances have entertained and inspired millions of people around the world, including members of U.S. Troops and U.N. Officials throughout Asia and Europe. In 2003, Oksana became the first Russian-American female pianist to travel overseas to entertain the U.S. Troops. She embarked on two world tours on behalf of the Morale, Welfare and Recreation Department (MWR) of the U.S. Navy.

The young musician continued on a solo tour to entertain the U.S. Troops in September 2003, which brought her to the countries of Italy, Spain, and Greece. In February 2004, Oksana went to Asia, where she performed for troops in Guam, Korea, Japan, Okinawa, and Singapore with Navy MWR. Upon completion of her performance tours, Oksana moved to Los Angeles, California.

Oksana’s move to Los Angeles brought her to the heart of the Hollywood elite, as she was the weekly performer at the legendary Polo Lounge in The Beverly Hills Hotel from 2006 until 2012. Due to her notoriety and interactions with individuals in the likes of Maria Shriver, the Osbourne family, Mel Gibson, Sir Elton John, among others, Oksana continues to be in demand for private and charitable events. To date, Oksana has recorded eight CDs of original, classical, and popular music.

Her “Free Floating” album won the “2010 Best Classical Album of the Year” on Solo (contact me). In addition, she has collaborated with other international music artists for recordings, and her original compositions have been sought after by highly-regarded individuals. Her album, "Best of Two Worlds," evolved from a collaboration with notable fine artist Jim Warren, who created his own art series based on Oksana's compositions.

As a music teacher, Oksana provides students of all ages a means for artistic outlet. "Being able to teach a variety of musical instruments through my School of Music makes me feel more complete as an artist and more accomplished as an individual," Oksana expresses, as she believes that sharing the gift of music is her primary mission in life. Currently, Oksana owns and operates Oksana School of Music in Beverly Hills, CA.

A native of Barnaul in Siberia, Russia, and alumna of the College of Music at Florida State University, Oksana currently resides in Beverly Hills with her family. She continues to dedicate much of her time, music, and sales of CDs to charitable causes, including helping children with cleft lip and palate through Smile Train.

Oksana Kolesnikova has been quite the angel for me. I see her 3-4 times a week for piano lessons and she has taught me so much about discipline, hard work, determination, success and life in general. If it wasn’t for Oksana, I wouldn’t be accomplishing some large goals and breakthroughs at this moment in my life. I hope Oksana will be a lifetime mentor and friend of mine. Cara Q., Actress

Oksana is an expert in her field. She is the total package, a gifted teacher, musician, and person. She has taken our Sam and instilled not just a love for music, but a passion. He practices without being encouraged or asked, and looks forward to each lesson. Her method is so effective; it has produced results that we would have never thought possible. Amy, Alex and Sam M., Los Angeles, CA

My son began taking piano lessons about two months prior to our finding Oksana. Prior to switching instructors, he hated practicing and his lessons. Piano held no interest for him. Once he began taking lessons from Oksana, everything changed. He practices on his own for longer periods than he is required to. Oksana has instilled a love of the craft in him. He loves it and he loves learning from her. He is so impressed by her ability and tries his best to be his best for her. Thank you, Oksana! Nanette and Ed C., Beverly Hills, CA

My daughter started piano lessons with Oksana at three and a half. She is now five and a half years old and not only playing but reading music as well. I’ve also noticed my daughter booking more jobs in television and print because of the confidence she has acquired by playing in piano recitals. Oksana is amazing with kids and I highly recommend her! Thanks Oksana you’re the best! Lisa Brunson