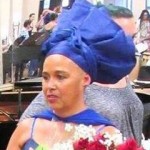 My name is Khemya MitRahina. I was raised up in Northern California in the arts of music and dance since a young age of three. I started lessons in Oakland, CA in dance, music and acrobats with Peggy and Leon Valdez and then tap & performance and theater arts with Chorlene and Art Duane in Hayward, CA. I became very active in elementary school choirs with music instructor, Ms. Bell. My father was head coach for Oakland Dynamites-Pop Warner in which I would do cheerleading and coordinate field marches. My mother was a professional tap dancer, in which would inspire me in the arts of dance-contemporary, latin and theater. As, I grew up after high school, I became active in cultural dance & music participating in Carnaval parades-S.F., Afro-Haitian dance performances and community colleges music groups of jazz, spiritual and soul. I continued further to the Education of music and dance in colleges. After, graduation I returned to Stockton, CA, and began organizing music and dance programs in the community for low income housing projects, where I began a non-profit organization: Pan Afrakan Dance & Music -instructing in African -and African-Caribbean Dance and Music community centers, after-school programs and festivals.

In 2011, I acquired the study of classical music for voice and piano, and furthered continued the study in vocal and piano pedagogy. In 2013, I began instructional teaching for beginning piano and vocal students in classical and contemporary styles.

I have worked with ages of 3-adults.

There are too many to name. I love classical music composers and vocalists, as well as, contemporary, folk, jazz, reggae, rock, R &B, Soul, Spiritual and Gospel.

There are no reviews yet for this teacher. Be the first to review Khamitic Healing Arts