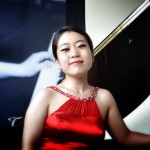 Pianist Lianhua Chi is a graduate of the Conservatory of Music at Brooklyn College where she received her M.M. under the tutelage of Dr. Adam Kent. A native of China, Ms. Chi began her musical studies at age 4, and studied at the Music University of YanBian with Professor Tianyi Zheng. She continued her studies as a full scholarship student at the Robert-Schumann Hochschule in Dusseldorf Germany, where she earned both undergraduate and graduate degrees with Professor Georg Friedrich Schenck. She has also played in Master Classes taught by world renowned pianists Hans Leygraf and Andre Watts. Ms. Chi's talents have been recognized in numerous international competitions, and she has been awarded top prizes in the Wiesbaden International Piano Competition, the Music of Dusseldorf University Schomolz-Bickenbach Piano Competition, and the Concorso Internazionale Di Esecuzione Musicale Citta Di Padova Competition. Her international concert engagements have taken her to Helsinki, Finland, where she was offered a solo recital at the Sibelius Academy in 2005. Her orchestral engagements have included a performance of Bela Bartok's Piano Concerto No. 3 with the Robert-Schumann University Orchestra at the Dusseldorf Tonhalle in 2006. Ms. Chi is also a featured Winner of the 2010 Conservatory of Music at Brooklyn College Concerto Competition where she performed the Edvard Grieg Piano Concerto in A minor, Op. 16 with the Conservatory Orchestra. Ms. Chi currently resides in New York City.

All ages and skill levels beginning age 5 to experienced pianists.

Romantic Era music including composers such as Schumann, Liszt, and Chopin.

There are no reviews yet for this teacher. Be the first to review Lianhua Chi