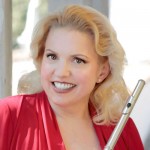 A first-prize winner in the Carmel Chamber Music Society Competition, Dr. Kris Palmer is the director and founder of Black Cedar, a rare ensemble devoted to music for flute, cello, and guitar. Under her leadership, the trio has garnered multiple grants from the San Francisco Friends of Chamber Music and the Zellerbach Family Foundation, commissioned four new works for this unique instrumental combination, released an album of new and re-discovered trios, and earned an invitation to the National Flute Association Convention. “You can easily see why this unique group has become a chamber music draw in the musically rich Bay Area,” writes James Manheim of AllMusic.com.

Dr. Palmer created an outreach partnership between Black Cedar and the Arc of Alameda County, bringing free chamber music performances to thousands of adults with developmental disabilities at the Arc’s San Francisco Bay Area campuses. The organization named Dr. Palmer their Bob Perrotti Volunteer of the Year in 2016.

Dr. Palmer made her New York recital debut at Carnegie Hall in 2001 to rave reviews as a winner in the Artists International Competition. The New York Concert Review called Palmer’s performance “incisive and expressive…particularly enchanting…with sensuous tone and pace.” Dr. Palmer is a second-prize winner in the National Flute Association’s Young Artist Competition, a first-prize winner in the Ruth Burr Awards in Houston, and a finalist in the Cynthia Woods Mitchell Young Artist Competition in Texas, the Hemphill-Wells Sorantin Young Artist Awards in Texas, and the William C. Byrd Competition in Michigan. Her solo album, Versailles, is a compilation of her own arrangements of French Baroque works. The New York Concert Review says, “She is clearly among the few current performers on any instrument to fully understand the nature of French Baroque music.”

Dr. Palmer holds a Doctorate of Musical Arts with an emphasis in eighteenth-century performance practice from Rice University, where she worked as a teaching assistant for seven years. She is the author of the book, Ornamentation According to C.P.E. Bach and J.J. Quantz, and the American Music Teacher magazine writes, “Clearly, the author is knowledgeable about ornamentation.” She earned her Doctorate of Music Arts and Master of Music from Rice University, and her Bachelor of Music from the University of Southern California. Her primary teachers are Carol Wincenc, John Thorne, Aralee Dorough, the late Roger S. Stevens, Walfrid Kujala, Anne Diener Zentner, Leone Buyse, and Gaetano Schiavone with the Conservatory of Santa Cecilia in Rome.

Solo flute repertoire, woodwind chamber music, solo recorder repertoire, flute and recorder technique, performance skills and practices, in all time periods of music from the Renaissance, through the Baroque, the Classical and Romantic Periods, and into the contemporary era of modern musical composition.

There are no reviews yet for this teacher. Be the first to review Kris Palmer, D.M.A. Flutist