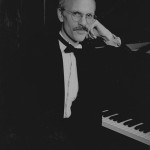 With a B.A. in Music from the University of Delaware, he has performed with the Delaware Symphony, played on hit records, led his own groups at many prestigious venues, e.g. Hotel Du Pont and The Grand Opera House, served as "house pianist" at the Columbus Inn for 10 years, played piano with name big bands (Tommy and Jimmy Dorsey with Robert Merrill, Bob Crosby, Sammy Kaye), toured full-time with professional rock groups (performing with Buddy Miles from Jimi Hendrix's Band of Gypsies and Peter Cetera of the group Chicago), arranged and recorded full orchestral arrangements for others, from children's music singer/songwriter Lois Young to Celtic star Charlie Zahm with the John Southard Highland Orchestra.

His piano students have won superior ratings at the Delaware State Solo Piano Festival, been accepted to music major degree programs at the university level, and many of his students have gone on to play in full-time working bands. He formerly taught at the Delaware School of Music and at the University of Delaware for more than 25 years, where he founded the degree course in Jazz Improvisation, and is now teaching at the Arts Academy at the Grand Opera House in Wilmington, Delaware and in his own private studio in Newark, Delaware.

Attended Temple U for 2 yrs in Music Ed and Trombone (w/Henry Smith, princ. tbn. of Philadelphia Orchestra) and Piano Performance (George Sementovsky, M.A. Juilliard)
B.A. in Music from the U of Delaware, Piano Performance and Pedagogy with Prof. Emeritus Mildred Gaddis, Theory and Composition. While at UD was employed as Teaching Assistant in Theory and Piano Pedagogy, was accompanist for the Concert Choir, founder of UD Jazz Band and assistant conductor for the Community Choir.
Private piano study with Orlando Otey and Dr. Robert Bedford of West Chester U.
Further studies in advanced concepts of ear training and jazz improvisation with Maestro Dennis Sandole in Philadelphia and arranging with Oscar-nominated arranger Don Sebesky in NYC where he won First Place award for highest score in class of 1987.
John has had extensive performance experience with a variety of bands: 5 years on the road with classic rock cover band PF and the Flyers in New England, 20 years with The Kim Milliner Band, hot jazz of the 1920s and 30s, 15 years with chanteuse Ann Eder in Chanson Noir performing songs from Germany (Kurt Weill), France (Edith Piaf) and American jazz standards 20s through the 50s, John Southard Trio for a dozen years at the Commonwealth Awards, gold Ballroom, Hotel duPont, Graper and Southard Band and Skylark featuring vocals by former Sony Artist (and wife!) Lois Young.

John is a true renaissance man. His expansive knowledge goes beyond a deep appreciation of all types of music. It encompasses everything from art to philosophy to pop culture. And in his approach to teaching he brings the full weight of his..

I have studied with many teachers in NYC, but get better lessons here in Newark, DE!