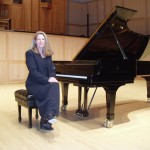 Janisse has a unique passion for teaching piano. She strongly believes in the development of the well rounded student by incorporating technique, diverse genres of repertoire, sight-reading, music history, theory, musicianship, and ear training.

Her philosophy promotes a life long skill and passion for art of music. She believes that students should be challenged to perform at their fullest potential.

She also strongly encourages her students to participate in community service activities that promote education, performance, and community outreach.

Permanent Nationally Certified Teacher of Music from the Music Teachers National Association and the California Association of Professional Musicians.

Tuition information is available upon request.

Beginning, Elementary, Intermediate, and Advanced Students of All Ages

Active Member of the Music Teachers Association of California 2012-2013

In 2007, Janisse was awarded the Honorary Teacher Certification from the American College of Musicians in recognition of her pupil's high achievements in the National Guild Piano Auditions

High honors for the National Honor Roll of Guild Teachers

In 2005, 100% of her studio received a Top Talent Superior Plus Rating in the National Guild Auditions

State Board Member of the Utah Music Teachers Association 2000-2007

In 2004, her students had a sweeping victory with 4 top cash prizes, and 3 honorable mentions in the UMTA Competition

In 2004, two students were selected and performed in a Master Class at the UMTA State Convention

Every year, her students are selected to perform in the UMTA State Conference State Honor’s Recital

In 2003, six of her students were selected for the UMTA State Honor’s Recital at the Convention at BYU
Students selected to perform in University of Utah Preparatory Division Honor Recitals 94–00
Winners of Utah Music Teachers Association State Concerto Competition

Every year, her students are award winning and have performed Piano Concertos with many different orchestras

Member of the National Charity League. Volunteering over 100 hours per year. She has also served on the Nominating Committee.

"When you play music, you discover a part of yourself you never knew existed." by Bill Evens

March 15, 2009 Thank you for teaching your students about grace and poise. Compared with the other 4 kids I saw perform with Peter and Lauren during the past two Saturdays, I must say your students sure know how to announce their pieces and make a "stage presence". The 2 boys Peter was with this morning didn't give full titles for their pieces (opus #) and didn't bow. They spoke quietly and didn't make good eye contact. Even though Peter was very nervous, he did not forget to smile, bow, announce his pieces clearly, and he appeared confident. I was telling my mom on the phone this morning that this is such a valuable skill that you have taught your students that can be used in any public speaking context. Thanks again for sharing this gift with my children. Sheryll Vanderhooft

March 28, 2009 Hey Janisse! I just wanted to say thank you so much for all of the preparation that you have provided for me. Today AIM seemed really easy and it was because you pushed us so hard. I thought that AIM would be really hard because of how you were testing us, but you were over-preparing us, which is much better than being under-prepared. I got through all of my exams in about an hour and a half, thanks to your preparation. Anyways, you are such a great teacher! Thanks for helping me out. You are awesome!!! Love, Lauren

Hi Janisse, Thank you for organizing such a terrific summer program! Alex had a blast, and within minutes of picking him up on the last day, he asked if he could do it again next summer. Ben wants to do it next summer, too. WOW – YOU ARE TREMENDOUS AND YOUR PIANO ACADEMY IS AMAZING! Many thanks J Heidi

October 7, 2010 Allison Barton, age 11 has to compile a scrapbook for a school assignment detailing what her life "has been" like for the past 30 years, i.e. when she's 41 and looking back at what she's accomplished. After i finished college, I heavily went into my passion, piano. I have now been playing since I was six years old and love it. I can also play a lot of woodwind instruments such as saxophone, trumpet, french horn, clarinet, and so much more. I find that if you now your basic steps in piano and all of the terms, it is very easy to learn how to play a new instrument. I often play for people for fun. I practice everyday for 2 hours I know it sounds like a lot but it is very fun and so worth it.