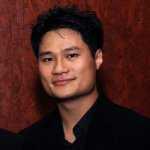 One year later, Nguyen went to France and later to the United States to pursuit his international musical career. Hoang H. Nguyen received degrees from Conservatory of Versailles (CRR de Versailles), Consevatory of Paris (CRR de Paris), Indiana University Jacobs School of Music, California State University, Fullerton (CSUF), and is currently a Doctor of Musical Arts Candidate at Claremont Graduate University. His former professor, Eduardo Delgado, described him as "...hardworking pianist who continuously impresses me with his individual approach and interpretations. He has long since become the most valuable member of my studio, and a role model for his younger classmates." Nguyen also studied in Montreal, Canada and Aix-en-Provence , France with professor Dang Thai Son as well as in Master Classes of Menahem Pressler and Gary Graffman.

Nguyen was the grand prize winner of the Concerto Competition performing with the CSUF Symphony Orchestra, and a finalist at the 2006 Los Angeles Liszt International Piano Competition. He performed as soloist with the Rio Hondo Symphony Orchestra, Fullerton College Orchestra in California, and Il Solisti di Perugia Chamber Orchestra in Italy as well as recitals in France, Switzerland, Italy, Poland, Thailand, Vietnam, and the United States at music festivals of Nice, Flaine, Guerande, Normandie, Perugia, Lausanne, Bowdoin, concert halls of Saint-Germain des Pres and Cite des Arts in Paris and several universities throughout Southern California. He has appeared on Vietnamese national and abroad televisions of VTV1, VTV6, Saigon TV, and Vietface TV.

Nguyen is devoted to his art in order to make a contribution to the musical community . He is a pianist for Ngan Khoi Chorus and as well as live appearance for Thuy Nga Production’s Paris by Night. Nguyen was the special musical guest to perform at the donor recognition gala celebrating CSUF 50th years anniversary. Nguyen recently appointed as Director of Musicians Affiliation of Vietnamese American Society for Creative Arts and Music, a national non-for-profit society to cultivate, nurture, and promote creative arts and music by Vietnamese Americans.

As a jazz musician, Nguyen studied with Grammy-Winning-Pianist Bill Cunliffe. He has appeared at Steamers Jazz Club in Fullerton and Bayside Restaurant in Newport Beach.

Hoang H. Nguyen is a guest lecturer for CSUF and currently a professor of music at Santa Ana College, Department of Music, where he teaches class piano, keyboard harmonization, and applied courses to music majors.

Member of the Music Teacher Association of California.

"I have studied piano since I was a young child and Hoang Nguyen has been my best teacher. As a concert pianist with an advanced degree in performance, he has an extensive understanding of the repertoire. Hoang teaches the musical line-where a piece is going and how to get there. He has high standards but is altogether patient and gentle with his students. I recommend him highly for students at all levels who have a serious interest in the piano and in playing great music." Ira T. Lott, MD. Professor of Pediatrics and Neurology, UCI School of Medicine

"For the past 6 years, we have had the honor of having Hoang Nguyen as our daughters’ piano instructor. He was highly recommended to us as a wonderful instructor with the best temperament and patience for young students. Immediately after the first lessons, both of our daughters were impressed and highly excited to study under Hoang’s tutelage. Hoang is a teacher who possesses great passion and knowledge for music. He instills a sense of dedication and confidence in our daughters’ piano training but always maintains the lessons to be fun and exciting. He tailors the lessons to the strength of the student’s ability by understanding the student’s interest as well as needs. He teaches a wide array of musical genres to keep the student’s interest and focus. He consistently challenges his students by involving them in recitals, level tests, or simply performing for community services. Aside knowing Hoang as a piano instructor, we are also honored to have experience Hoang’s numerous solo performances. His passion and dedication clearly define him as a renowned performer. Through the years, he is not just a piano teacher but also a mentor for my daughters. It is with great pleasure and honor to have him as our daughters’ piano teacher. We have the utmost respect and highest regard for him as a person and a wonderful piano teacher." Tu H. Do, Parent of Natalie, 13 years old.