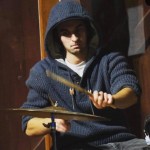 Currently, I am pursuing a Bachelors degree in Music Industry at University Of St. Thomas in St. Paul. I am in my Junior year. In addition to music, I am interested in all sports, gardening, animals and fitness.

I have been teaching for several years at Reisinger Conservatory of Music. Having started piano lessons at the age of 4. I have an extensive background in music. Besides percussion I also play: Piano, Guitar, Bass and a few other instruments. Some of the instructors I learned from include: Mr.Gene Piccolo- a well known local jazz muscian who has since passed. I also studied extensively at School Of Rock Burnsville, Eden Prairie and St. Paul. I have studied with Leon Lombardo and had a masterclass with Gordy Knutson of the Steve Miller band. Most recently I have studied with many talented muscians at the University of St. Thomas.

I am currently in a band called The Jewels. We have several singles available on Spotify,  YouTube, and Apple Music.

Currently, I am pursuing a Bachelor degrees in Music Industry at University Of St. Thomas in St. Paul.

I teach many styles  of music. I teach the core fundamentals that are needed for any student who wants to prepare for school band or any formal performance.

I help students who need to improve or prepare for their school music programs. I feel it is important to learn the correct way to play percussion instruments. I also have helped students prepare for Marching band, drum line etc.

I teach students of any age and skill level.

My tuition is $130 a month. That includes minimum of 38 lessons a year. My program also includes a trophy and incentive program. These programs are vital to help the students retain their interest in music. Books are included in tuition fee.

I teach all age & skill levels.

Pretty much into most music including (not in and order and certainly not limited to:)

There are no reviews yet for this teacher. Be the first to review Chris Reisinger