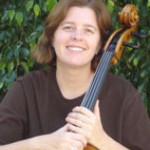 As a performer, Rachael was principal cellist of the West Valley Chamber Orchestra for eight years, where she was featured many times as a soloist performing works such as Dvorak’s Cello Concerto in Bb, Haydn’s C Major Concerto, Saint-Saens Concerto No. 1, Vivaldi’s Double Concerto in g minor, Boccherini’s Concerto in Bb, Faure’s Elegie and Bruch’s Kol Nidrei, among others.

Rachael Lonergan has been teaching cello since 1989. She was a coach for the Suzuki Music Program of Los Angeles for twelve years, and was the cello coach for both the New West Ventura Youth Symphony and the Avanti Chamber Orchestra. She was on the faculty for the Southern California Suzuki Institute in 1996. Since 2003 Rachael has taught chamber music classes at The National Cello Institute. In 2006 Rachael started the San Fernando Valley Cello Ensemble, which consists of students from her studio. The group performs at various retirement home, libraries, and hospitals. Rachael was coordinator of the American String Teachers Association Area I and II Competition from 1999-2006. Since 1996 she has been the director of Suzuki Cello Graduation for the Suzuki Music Association of California Los Angeles branch. She was on the Los Angeles Cello Society Board of Directors for ten years, their membership co-chair for four years, and coordinated the annual Student Honor Recital. Rachael has edited three books in collaboration with Last Resort Music, played on several motion pictures, a Gloria Estefan music video and was featured in the Air Supply music video "Always."

Because my students range from age 4 through adult I use a variety of teaching methods and literature. I have started many students in Suzuki Book 1 and taken them through pieces such as Haydn Concerto in D Major, Dvorak Cello Concerto, Elgar Concerto, etc.. Each students lesson is personalized and based on his or her current level on the instrument. I also look for pieces that will stimulate the students interest in the cello, and often ask them to tell me their favorite type of music. Often I find myself up late at night rewriting songs for students. Sometimes we delve into one period of music that the student greatly enjoys. There are many ways to go about learning to play, do extensions, count, read etc. Some students use the Suzuki Books while others are on their own unique path. Young students are gently encouraged to learn note reading, while older students are given age appropriate reading books.

I will only answer requests made to the above email or phone.  Thank you.

Rachael's students have won top awards in competitions such as ASTA, PTA, VOCE, SYMF, LAVS, YAG, and Memorial Awards, among others. Her students participate in chamber music programs at Colburn, and JCM as well as local youth orchestras such as CSUN, Conejo Valley, LAYO, and Colburn. Numerous students have won concerto competitions and have performed solos with various orchestras. 95% of her students are also members of their school orchestra in addition to being members of the SFVCE which performs regularly throughout the year.

Rachael thanks all the teachers who have influenced and shaped her playing and teaching over the years: Gretchen Geber, Richard Mooney, Richard Allen, Peter Rejto, Matt Cooker, John Walz, and Andrew Cook. Without their influence, guidence, and support she knows her life would be very different.

My 14-year-old son has studied cello with Rachael for several years. Thanks to her expert teaching skills and special ability to connect with students, his interest in cello has blossomed into a passion. He loves playing and looks forward to his lessons. For a kid who once easily tired of extra-curricular activities, that's huge! He also enjoys being a part of Rachael's cello ensemble and takes much inspiration from her brilliant advanced students. I highly recommend Rachael Lonergan to anyone who wants to study cello with a passionate, effective, and fun teacher.

Rachael is a very thorough and caring teacher. She is always organized and prepared, and she uses every moment of her lessons to help students play their best. I would recommend her to students of all levels and ages.

Rachael Lonergan is the perfect cello teacher for anyone looking for lessons! She not only pushes her students to a very high level of playing, but she makes the process of learning an instrument always fun and stimulating. In addition to the great amount of musical knowledge that Rachael has to offer, she also has a terrific sense for the needs of the particular student she is working with and always tailors her teaching to each individual. She works extremely hard at providing memorable performing opportunities for her students. In addition to the solo recitals which she organizes, Rachael also puts together a terrific concert each year which features cello ensemble music ranging from small quartets to one large cello orchestra. Because Rachael is a valuable member of the Music Teachers Association of California (MTAC), her students may also benefit from the programs and concerts offered through that association, including Certificate of Merit and various competitions and festivals.

I have nothing but the best to say about Rachael. She took me, someone who had never held a Cello in my life and sat patiently with me until I started to impress myself. I knew going in, it was a difficult instrument to learn but Rachael has wonderful teaching abilities. She insists on 'getting to know' her students, both as people and what their goals are in terms of their Cello playing aspirations. I was extremely proud of the progress I made and continue to play and experiment to this day. I have always been someone who has to admire a teacher's ability and Rachael is a wonderful Cellist. Her teaching philosophy and method is sound, well structured and progress is assured. She is also extremely kind and affable, unlike a previous teacher who would rap my knuckles with a wooden ruler because I didn't hit a position perfectly. No such drama with Rachel. As one of her students I endorse her 100%. A great teacher. A great person and she will have you sounding like Pablo Casals in no time.

Rachael is a great person, which I believe every great teacher should exemplify for her students. She's collected many different teaching methods for every level and for different learning types. She's patient and won't quit until you get it right :) (I had a terrible bow hold before I met her.) She's involved in many different teaching associations, so if you're the type to want to compete/receive certifications, she can make this happen. She has great relationships with others in the industry and can help you or your child branch out in whatever ways you want. I took lessons with her throughout high school and she helped ignite my passion for cello, and life in general. I ended up becoming pretty serious about it and went to receive a BM in cello performance from the Peabody Institute. Though I don't play the cello anymore, I thank music education for my skills in collaboration, discipline and focus on work, and appreciation for all things artistic. Some of my best memories are during the times I studied with Rachael - she was like a second mother to me.

Great teacher, totally understanding and easy to work with. She knows how to analyze what is going right and wrong, and prioritizing strengths and weaknesses. Even more important, she is good with cues to fix things and prevent bad habits that could become very hard to break. A good sense of student progress and how fast to move forward.

Rachael has taught my daughter for the past 7 years. My daughter started at 7 years old. Rachael is truly the BEST cello teacher. She is nurturing and encouraging. With Rachael's guidance my daughter loves to play the cello. She has gone on to play solo concerts and is a member of a prestigious youth orchestra. Look no further for a cello teacher...you've found the BEST!

Rachel is simply put....amazing. She shepherded my daughter through elementary school and on into LACHSA (the Los Angeles High School for the Arts). We travel a lot as a family and my daughter has had lessons all over the world. Rachel was...and is...the best. You will not regret placing your child's musical future in her hands. You will be well rewarded.

Rachael is an amazing cellist and cello teacher. I have been studying with her for many years now and she has always motivated me to grow as a musician. She teaches her students the mandatory techniques that they need to know, but she also allows her students the freedom to grow at their own pace. I am extremely please with what Rachael has taught me and I can't wait for what is to come. I commute from Malibu to see her because I feel that every lesson spent with her is vital to my growth as a musician. I highly recommend going to Rachael if you or anyone that you know wishes to learn how to play the cello and get lessons from the very best!