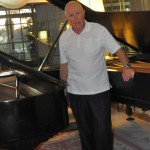 I began my career as a pianist and part-time organist and later taught in several universities and eventually worked in music as piano teacher, conductor, guest lecturer and arts consultant, serving on several boards of directors for arts organizations.

I have taught piano privately and in college, and have served on the faculty at the State University of New York at Stonybrook, Earlham College (where half of my teaching load consisted of piano lessons), Indiana University East and Miami University of Ohio.

From 1994 to 1996 I served as Jury Chairman for the International Piano Competition in Cincinnati, Ohio.

In 1976 I founded the Whitewater Opera Company in Richmond, Indiana, and in 1990 also founded the Sorg Opera Company in Ohio, running both companies concurrently. Since that time I conducted more than 500 performances of operas, operettas, musicals and concerts at home, on tour and as guest conductor in America, Italy and Japan.

In addition to piano, I taught courses in Music History, Theory, and opera and offered workshops as well as consultancies, and served as a judge for opera competitions for the Dayton, Ohio and Columbus, Ohio opera companies. I also judged scholarship competitions for the Cincinnati Conservatory of Music and the vocal and choral finals for the Indiana Statewide Music Competitions.

Shortly after the death of my wife (who was an opera singer) I retired from conducting and returned to teaching piano.

Majored in Musicology for PhD at New York University. Completed everything but the dissertation when I left to teach at Earlham College in Richmond, IN.

Received an Honorary Doctor of Music degree from Indiana University in 2000.

Taught piano as well as harpsichord and organ.

I have taught all ages from 5 to 65, with the greatest concentration in ages 8 through college level.

Awards from the City of Cincinnati (World Piano Competition), Ohio Federation of Music Clubs, Governor's Award for Excellence in Education in Indiana, and the Commonwealth of Kentucky (designation as a Kentucky Colonel by the Governor of Kentucky).

our son has been his student since 4 years ago. he is playing amazing. Mr Combopano is an excellent teacher, so passionate about his job and great with kids .

Mr. Combopiano is excellent! My daughter has been learning piano with him for one and half year now. She made marvelous progress on her skills.

The best MAESTRO my son ever had, who is so dedicated and wonderful with children. I can’t recommend him highly enough! A serious teacher who still makes lessons enjoyable but provides excellent grounding for beginners and superb training for older kids.