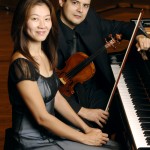 Pianist Eriko Izumida has been an active soloist, collaborative pianist, and chamber musician. She has performed extensively throughout the United States and Asia with numbers of artists including the Cleveland Orchestra members. In addition, she presents a number of recital programs for various community service venues. Ms. Izumida has been teaching the piano privately and has been on the piano faculty of Baldwin Wallace Collage Preparatory/ Adult Education Department, and also a staff accompanist at BW Conservatory. Her students have won contests and scholarships; some has been frequently appearing local hospitals and retirement houses. A native of Japan, she began studying piano at the age of three. She has studied with Graeme Humphrey at the Royal Academy of Music in London, Dr. Thomas Hecht at the Cleveland Institute of Music where she holds both Bachelor of Music and Master of Music in piano performance. Other teachers include Robert McDonald, Jacques Rouvier, Ellen Mack and Daniel Shapiro, Noriko Iwabe and Michio Kobayashi. Her chamber music/collaborative piano mentors include Anne Epperson and Eric Charnofsky. In addition, she studied harpsichord with Janina Ceaser. Her CD is available under TC Recordings label.

Described as “Virtuoso-violinist extraordinaire” (Musical Horizons), Hristo Popov, brings tremendous experience to the concert stage. He made his orchestra debut at the age of nine with Plovdiv State Philharmonic Orchestra and since then has performed at major performing arts venues as recitalist, chamber musician, and concerto soloist in United States and Europe including Carnegie Hall – New York, Dvorak Hall at the Rudolfium in Prague, Palau de la Musica in Barcelona, among others. His Carnegie Hall debut has been hailed by The Strad Magazine as “…alert and energetic”. Dr. Popov is a prizewinner at the Kozian International Violin Competition, Silver Medalist at the California Young Artist Competition, winner of the Grand Prize at the International Institute of Music - under the patronage of Lord Yehudi Menuhin - (Germany, USA), first place at the American String Teachers' Association Chamber Music Competition. He has appeared as guest artist in numerous festivals such as Park City International Music Festival, Kent/Blossom Music Festival, Plovdiv International Chamber Music Festival, Sofia Musical Weeks Music Festival, Summit Music Festival in New York, InterHarmony International Music Festival, among others.

Lessons in Piano, Violin and Viola

Lesson fees depend on the lesson format, and teacher's credentials.

Lesson formates depend on the level and goal of students. Typically a beginner would take a 30 min. lesson, and advanced students preparing for recitals and auditions would take 90 min.

All levels accepted. We do an informal interview to determine level and needs of study.

We have a simple teaching philosophy: one of our best strength as music teachers is motivating and inspiring students to to become the best musicians they can be. As a result, many of our beginner students continue their studies and have become advanced players performing with in their youth and/or school orchestras as leaders and on occasion as soloists. Our approach to every student is individual, designed to bring out expressive musicality through mastering instrumental technique.

Previous students of Dr. Popov and Ms. Eriko have won numerous contests and have played in leadership positions in their youth orchestras and schools. Former students have been accepted to leading music schools and have been successful as professional musicians in the United States and abroad.

Our daughter took violin and piano lessons with Dr. Popov and Ms. Izumida. She excelled in both and we are very grateful to both for guiding her through her musical education. She performed in recitals and music festivals a very high level and we couldn't be happier.

Our daughter took violin and piano lessons with Dr. Popov and Ms. Izumida. She excelled in both and we are very grateful to both for guiding her through her musical education. She performed in recitals and music festivals a very high level and we couldn't be happier.

Dr. Popov provided violin and viola lessons to our high school-aged daughter for 2 years. Her skills improved tremendously as did her confidence in playing more challenging pieces. We will miss him!

Ms. Eriko has been a wonderful teacher for our daughter. She has improved so much. Ms. Eriko encouraged her to perform solo, chamber music and participate in summer camps. We would recommend her to anyone very highly!

Dr. Popov was my teacher at Western Reserve Academy. He is the best violin teacher I have ever had. He helped me realize what is important in music and performance. As a result of studying with him I got into the Cleveland Orchestra Youth Orchestra.

Hristo is an inspiring teacher! My daughter, Samantha, took classes with him for a year, a couple of years ago as an advanced student, and Dr Popov was the best thing that happened to her! Not only did he improve her playing, he changed her whole attitude toward the instrument. He is exceptional and terribly missed!