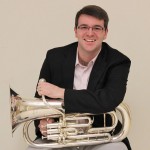 I’m a local brass instructor looking for new students for the upcoming term. I graduated from UNC with a degree in music performance on Euphonium. I’ve been giving lessons in the area for 5 years and have many references from current and past students. I teach Tuba, Trombone, Euphonium and Trumpet. I also offer reduced rates for financially disadvantaged households. Lastly, I give the first lesson free to make sure that me and the student are a good fit. Any other information can be seen at my website: bobby-warren.squarespace.com

Bobby Glenn Warren III I graduated from South Brunswick High School in 2011 where I performed in the wind ensemble and the marching band. During high school I also performed in the Brunswick Concert Band, Brunswick All-County Band, South Eastern All-District Band and the first ever UNC-Wilmington Honors Band. I attended the University of North Carolina at Chapel Hill where I majored in Music and Biology. During my time at UNC I performed in several ensembles including the UNC Wind Ensemble, Symphony Band, Tuba Quartet, Marching Band and the University Band. I received private instruction from Mike Kris on Euphonium and held two solo recitals. Following my freshman year I began to give lessons to local middle and high school students and haven't stopped since! During my senior year I was awarded the prestigious Earl Slocum Band award: This award honoring Earl Slocum, Director of Bands from 1935 to 1956, is given annually to the senior member of University Bands who has demonstrated meritorious achievement with regard to musicianship, leadership, and academic excellence, and who also has made a significant contribution to the growth and success of the University Band Program. I graduated from UNC in May of 2015. I currently perform in the Village Band and I am 2nd Euphonium for the Triangle Brass Band. I work as a research technician in the Fowler lab at Duke University in the Division of Infectious Disease where I research the bacteria Staphylococcus Aureus.

Method #1: Paid at each lesson

Method #2: Paid at the first lesson of the month with a built in discount!

There are no reviews yet for this teacher. Be the first to review Bobby Warren's Music Studio