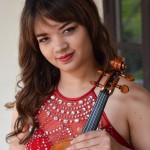 American violinist and violist Annelle K. Gregory is a laureate of international competitions, concert soloist, and recording artist.  She is the 1st Prize & Audience Choice Award winner of the 2017 National Sphinx Competition and Laureate of the 2013 Stradivarius International Violin Competition.  In 2017 she released the first-ever CD of Rachmaninoff's complete violin/piano works (Bridge Records) and in 2019 released, "Russian Music for Solo Violin and Orchestra" (Naxos).  As a soloist, Annelle has performed with the symphonies of Houston, Detroit, Chicago Sinfonietta, Kiev Virtuosi, San Diego, New Jersey, Nashville, Santa Monica, New Hampshire, and the California Chamber Orchestra, performing in such venues as Carnegie Hall, Walt Disney Hall, and the Kennedy Center, as well as abroad in Azerbaijan, England, Germany, Portugal, Russia, Spain, and Ukraine.  Her teachers have included Michael & Irina Tseitlin and Glenn Dicterow.

There are no reviews yet for this teacher. Be the first to review Annelle K. Gregory